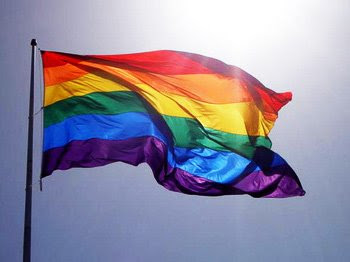 This week, we celebrate Pride in Houston. This year’s Pride Parade marks the 40th anniversary of the Stonewall riots in New York. The Stonewall riots were the catalyst sparking the modern gay rights movement. On June 28, 1969, police raided the Stonewall Inn, a gay bar in Greenwich Village. It was a scary time to be gay. People feared being arrested for simply being in a certain place or having their pictures printed in the newspapers, knowing they would be fired if they were outed. Today, the GLBT community fights for equality; then, they fought to exist. The gay community had never fought back against the oppression it had faced. They refused to be taken to jail, they refused to give identification. Some were let go by police, but instead of scattering as they usually did, they stayed and gathered in the street. The crowd grew as the few police officers who raided the bar waited for more officers to arrive. As patrons were being led out, some began to resist. The crowd joined the fracas, and rioting broke out. Years of oppression spilled into the streets of Greenwich Village. The riots continued for days. Our community had risen up for the first time. A year later, in cities around the country people marched to commemorate the event. Some were called “Gay Liberation Day” some were called “Gay Freedom Day,” today we call it simply PRIDE. This week, we march to commemorate the beginning of our movement and to celebrate what has been accomplished since.

July 4 marks another anniversary for the City of Houston, the killing of Paul Broussard. He was beaten to death by ten teenage boys from the Woodlands who wanted to “beat up some queers,” as one defendant put it. Paul was 27, my age. It is hard for me and many of my peers to comprehend someone could be killed for merely being gay, that only forty years ago people could not be openly gay for fear of being arrested, and that only eighteen years ago someone was murdered for being gay right here in Houston. It is also hard for our generation to understand the depth and depravity of the AIDS crisis without experiencing it. People learned daily another friend had died. I have be told stories from one of my mentors, openly gay City Council Member Sue Lovell, of how many gay establishments there used to be in Montrose and the wonderful vibrant gay community of the 70’s and 80’s. I asked her once, “Where are all those people and businesses today?” She simply said, “They all died,” referring to all those who were lost to AIDS. I had heard and read of the horror of the AIDS crisis, but this was the first time I could comprehend the severity of those times.

Today we can freely rent apartments, be openly gay at work without fear of being fired, and for the most part exist free of shame and trepidation. Gay youth feel comfortable coming out at a younger age. The GLBT community has made its way into the mainstream of American culture. Gay characters commonly appear on television, though it was just twelve years ago Ellen DeGeneres’ coming out episode was banned from several stations and was preceded by a parental warning before airing. Opponents of gay rights and gay equality are fighting a losing battle. Being gay is not a divisive issue with my generation. Given that it is easier to be gay these days, it can sometimes be difficult for younger GLBT people to identify with with the struggles of the past generations of their community. Many young people may not have heard of the Stonewall riots, they may not have heard of Paul Broussard’s murder, they do not know what it is like to lose dozens of friends to a horrifying illness, and they do not know what it was like to live in fear of merely being who they are in public. Recently, this is where complacency has taken hold in the gay rights movement especially with GLBT youth. However, acceptance and toleration are not equality. The recent set backs, such as state constitutional bans on gay marriage and the Prop 8 fiasco in California, have proven that there is still a long battle ahead. There is a buzz in the community that many have not felt in a while. Many of us, who have grown up with it being acceptable to be gay, have had their eyes opened to the fact that we are still not equal, and realizing we have laws of our country, our state, and our city affirming that we are not equal. Living a life being tolerated or accepted is not the same as living as an equal member of society. The complacency is now being thrown aside.

So this week we celebrate. We observe who we are and our community’s accomplishments. As you gather for Pride, take time to remember how we got here. Remember those who fought back in the Stonewall riots, remember the thousands that would be standing next to you that were lost to AIDS, remember Paul Broussard and Matthew Shepard, remember the struggle the generations before us went through so that we may live as who we are. Celebrate but remember, we have come a long way and have a long way to go.

Nick Hellyar is the Vice President of the Houston GLBT Caucus
nhellyar@thecaucus.org
Posted by The Caucus Blog at 5:39 PM No comments: