Washington D.C. begins recognizing out-of-state same-sex marriages performed in other jurisdictions today. Same-sex couples will not be able to marry in Washington D.C., but the marriages from other states will be recognized in the District. As of now, the Defense of Marriage Act (DOMA), allows states to deny marital rights to same-sex couples who were legally married elsewhere. Here is a quick run-down of how things will work in D.C. from the Washington Post. Gay marriage is legal in four states, Connecticut, Iowa, Maine, and Massachusetts, with New Hampshire and Vermont joining them in coming months. Marriages performed in California before Prop. 8 will also be recognized. 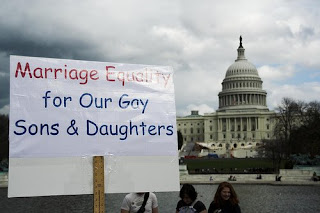